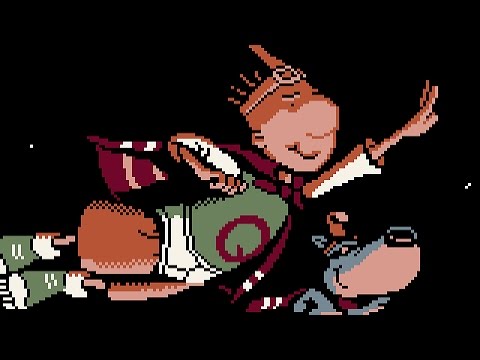 I play through the game three times in this video to give an idea of the variety of quests (described below) available.

Who else remembers turning on Nickelodeon to watch Doug Funnie, AKA Quailman, constantly obsessing over the charms of one Ms. Patti Mayonnaise? I loved it, though I had no idea until I played this that it had later become a Disney property.

This is a pretty neat game. It’s very much so a non-violent adventure game with only some brief moments of action when Doug becomes Quailman in order to staunch some evil or other. With his belt on his head and his underwear over his clothes, of course.

At the beginning of the game, Doug is sweating being stood up by Patti for a date. He decides to stalk, err…search Bluffington for her, hoping to figure out what happened in that weirdly obsessive way unique to angsty teenagers. To hunt her down, he speaks with people around town (Fentruck, Skeeter, Beebe, Roger, and all the other regulars) who send him on mini-quests that hopefully will lead him to Ms. Blue Balls/Condiment herself. He will find her after the third of these quests, and she’ll explaim what happened. The outcome (good or bad) of her explanation depends on how long it takes Doug to do everything. If you take too long, too bad for Mr. Funnie.

The novel thing about this cart is that it mixes these quests up between plays. There are over a dozen quests, and the game randomly selects which three you’ll get when you start it up. It gives it some decent replay value, but after you’ve seen them all, that’s about it.

The graphics are pretty nice, and the stories are little more than fetch quests, but it’s all in good fun, and it keeps everyone in character pretty well. For fans of the show, it’s a fun, simple title, though I doubt that it’ll hold much appeal for people that aren’t familiar with the cartoon.

And to think that this played in the same time block as Ren & Stimpy!
____
No cheats were used during the recording of this video.