How to play Baseball (Drinking Game) 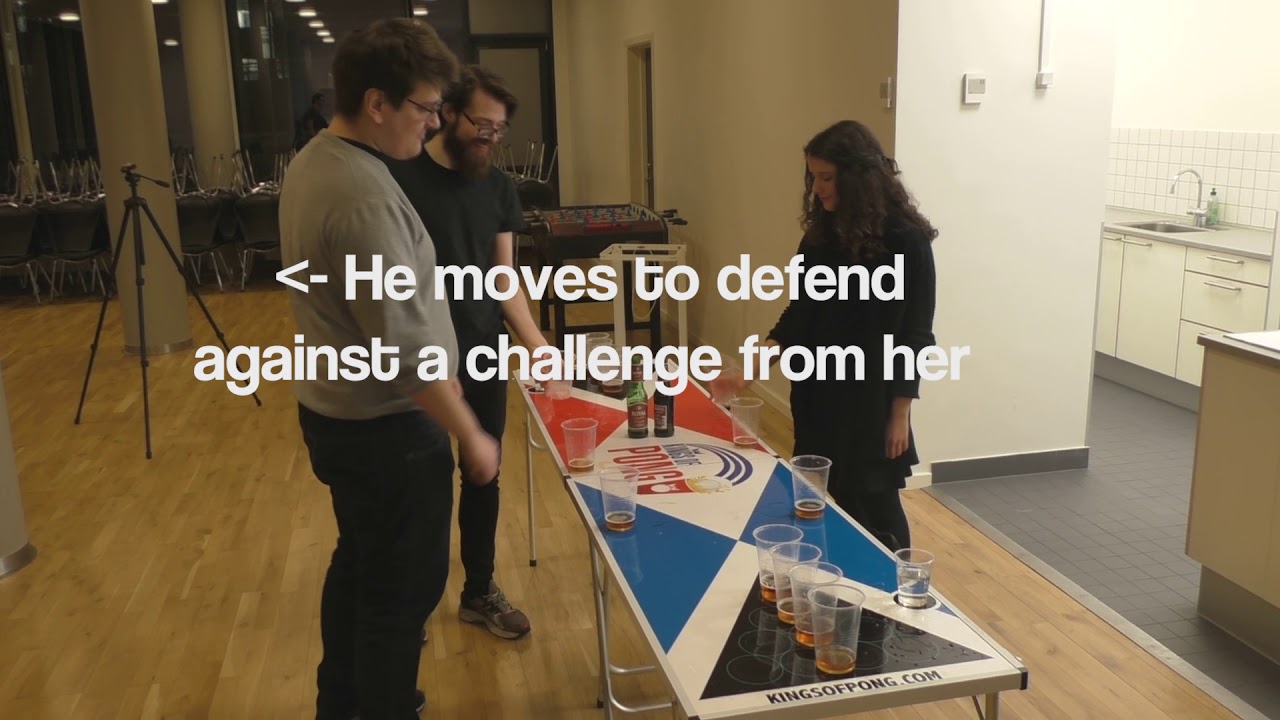 How to play the Baseball :
Baseball is a highly entertaining and exciting variation of beer pong with a broader and higher skill ceiling as it incorporates multiple disciplines and is more dependent on a great team performance.
Two teams of typically 3 people compete to score a set amount of points to win.
Typically, 11 points.
A total of 16 cups is needed as well as preferably three balls.
Before the game starts the teams agree on who starts and minor things like if “blowing” is allowed.

The game has two repeating phases for each of the teams.
An attack phase, and a defense phase.
The phases last until the attacking team have expended three lives, after which it is the defending team’s turn to attack. This repeats until one of the teams score the final point.

ATTACKING:
Your teams goal is to score points.
Assuming three people is on your team, each person get THREE attempts to throw a ball into the row of four cups in the other end.
Upon hitting either first, second or third base, the attacker will move to the appropriate base on the side.
People from the attacking team standing at any base can initiate a flip-cup challenge whenever the game is active. A won flip cup challenge moves all team members at a base a spot up. A loss results in death and the loser goes back to his team. I will cover the rules for the flip cup challenge later.
Team mates standing at the bases during a successful throw from another team mate move up according to the hit.

Hitting the furthest cup in the column of four means hitting a home run.
This scores a point instantly as well as “sending home” any team mates standing by the bases, scoring an extra point for each team mate.
Failing to land the ball in any of the four cups with three attempts results in a death or a loss of a life for the team. After which another team mate will attempt to score with three new chances.

DEFENDING:
The defending team is trying to prevent points from being scored as well as shorten the opposing team’s attack phase.
If the attacker lands a ball in the column, a team mate have to drink the beer and refill it before the game can resume.
Another team mate should then move to stand opposite of whichever base the attacker is standing at. This is done to respond to a flip cup challenge if issued by the attacker during active play.
Besides the attacking team losing a life if failing to land a ball within three tries or losing a flipcup challenge, the defenders can attempt to catch a ball that bounced off a cup in the column as well as throw passed the table without hitting anything.
As long as the ball hasn’t touched either the table or the floor, this counts as a loss of life for the attacking team.
FLIP CUP CHALLENGES
Whenever the game is active, the attacking team has the opportunity to initate flip cup challenge.
The attacker may fake a start as much as he or she wants, but as soon as the cup is touched the challenge is on.
To win the challenge you have to drink the beer, place the cup with the bottom on the edge of the table and then flip it in one motion resulting in the cup landing face down.
Multiple attempts may be needed, but it is the person who successfully land’s his or her cup upright first that wins the challenge.
Upon winning, the attacking team moves up one base and may initiate another challenge right away if the game is active.
Upon losing the attacker moves away from the base and goes back to the team, losing a life in the process. A defender losing a challenge may abandon the current cup and go straight to the next base that the winner of the challenge is standing at, in order to defend again if the challenge is re-issued at the new base.

FAIR PLAY AND TIPS
In order to reduce chaos and keep an easier overview, always make sure that everyone is ready before resuming the game. An example of this is whenever someone is pouring a beer. The game is inactive as long as there is an empty cup in the field. While waiting for the game to resume, speak out the score as well as the number of lives left for the attacking team and number of attempts.
This help preventing any confusion as to what the real score is.

Attackers and defenders should get a minimum of eye contact acknowledging that the game is active before throwing a ball in the column. Only bases won or points scored while the game is active counts.
The game is of course also on pause if people are restocking on beer.
A column cup that falls over due to an otherwise successful throw, counts.
In some situations it may be advantageous to rely on a flipcup challenge rather than a shot, especially on the last life with the last attempt. Confer with team mates before proceeding.