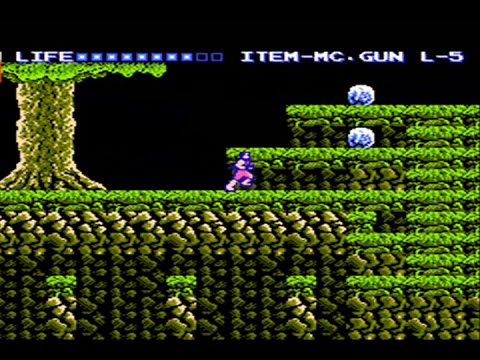 Player:Heroes Of Xanadu – The strange and fascinating music of Predator remind me of Dynowarz: The Destruction of Spondylus.You guys can imagine just how amazing this game would be if Konami would have made this game instead of Pack-In-Video.”Just way too much small ledges jumpings in this game”.

Predator: Soon the Hunt Will Begin is an action game developed and published by Pack-In-Video for the Famicom in 1988. In Japan, the game is known as Schwarzenegger Predator (シュワルツェネッガー プレデター?). At that time, Activision owned the rights to publish software based on the Predator movie license in the United States. While they published Predator for several popular home computer systems, they licensed Pack-In-Video’s game and published it for the NES. Pack-In-Video made a very similar game for the MSX, but it utilizes a different system of non-scrolling stages.The game is known for its high

level of difficulty. It is an action game that contains two different modes of side-scrolling. One mode is known as “Big mode,” and presents the player as a large and highly detailed sprite who must destroy or dodge orbs that appear on the way to a fight against the Predator. Between each Big Mode stage are several normal mode stages where the player appears much smaller in a larger world. The player must collect weapons and use them to clear a path through enemies to an exit that leads to a new stage. Some stages contain more than one exit, creating several branching paths to the very end of the game.